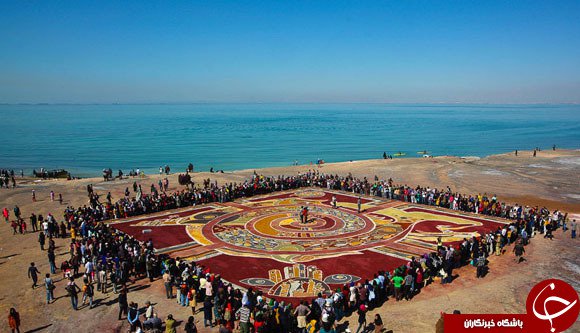 The sandy carpet exhibits three main characters of fish, camel and white mangrove or Hara trees, which are deeply associated with the culture, traditions and historical concepts of Hormozgan Province. The fish and camel represent the local trade and major career paths of the local people. But the white mangrove or Hara trees are a symbol of resistance against drought and salinity, which is greatly representing the opposition of these people against Portuguese invasion in 1507.

Ahmad Kargaran, artistic director of the project, said this sand carpet covers an area of 1,600 square meters and is made of different types and colours of sand. He added that between 40 and 60 artists from Hormuzgan province and abroad are collaborating on the 25-day project that completed on Feb. 2015.

He said “They have used the unique, colourful sands of the island, which have made the carpet a unique artwork,” adding that the carpet is different in design and size compared with other projects.

Five other sand carpets had already been made on the same island. Before this project, the world’s largest sand carpet was made on the Canary Island and measured 900 square meters.

This project was first started in 2008 for the first time and there have been 6 huge projects so far.

The first years carpet was crafted in 1200 square meter and completed in 10 days collaborating with 25 artists and the application of 70 coloured sands with the budget of 10000 US dollar. The annual nomenclature of these carpets which tries to universalise specific message to the world. This carpet was named Persian Gulf to oppose the unfair attempt of google in changing the historical name of Persian Gulf to Arabian Gulf in google map.

The second one crafted in 2000 square meter with more than 40 spectacular designs, representing the culture and traditions of southern people of Iran.

The third years carpet crafted in 1600 square meter and completed in 15 days collaborating with 30 artists and the application of 70 coloured sands.

The fourth one was in 1400 square meters, applying 90 different coloured sands and collaborating with 80 artists. The main message of this carpet was to introduce the legendary heroes of the local areas.

The fifth carpet was crafted in 1600 square meter. the illustration of local land turtle was chosen as the special design of this year to represent the global message of peace.

The last one was a 2000 square meter crafted carpet in 10 distinct pieces. The illustration of a legendary giant fish named “ KELK PERU” was used to introduce the local stories of ancient people who believed in the helps and great assistances of this fish, which was brought to them during disasters.

The outstanding character, which makes this extraordinary carpet unique, is the application of more than one hundred colourful sands, which have been excavated, from local mines and hills in this island. The sandy carpet exhibits three main characters of fish, camel and white mangrove or Hara trees, which are deeply associated with the culture, traditions and historical concepts of Hormozgan Province.

The main target and purpose of this great work of art is to encourage people from around all around Iran and other countries to come and visit this land, which can greatly promote the local trade and businesses of the local people. Performing this project brings more than 10000 visitors from around the world every year. 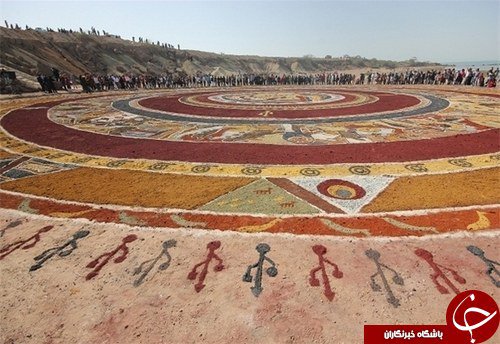