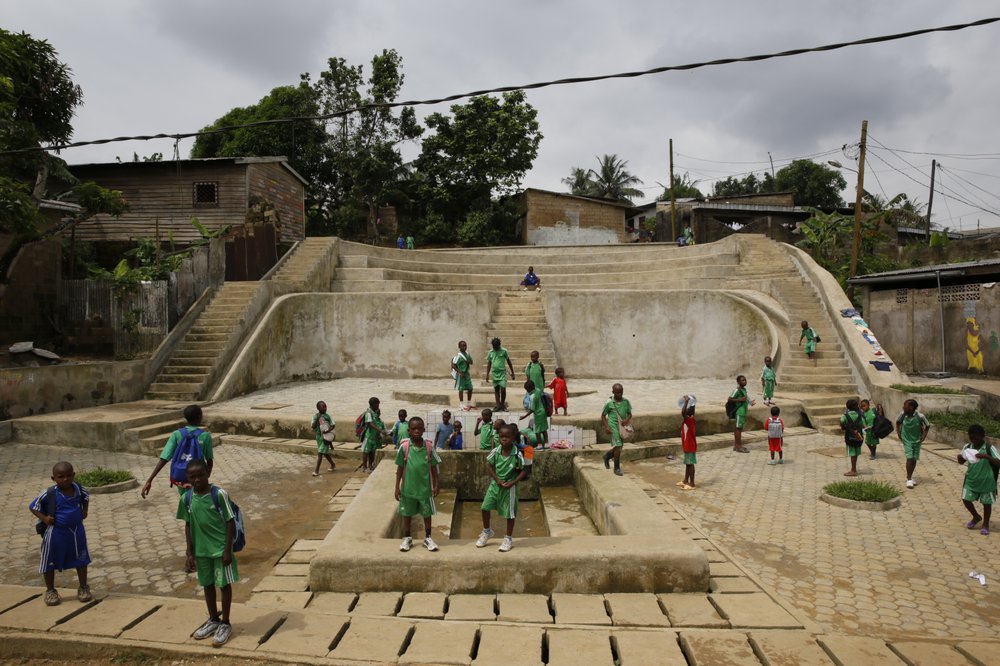 This artwork is by sculptor and artist Philip Aguirre. He transformed a vital water source in the muddy slums of Douala (Cameroon), into to a grand architectural statement. And in doing so created a gathering space, a meeting point where people can spend time together in a more pleaseant environment. A place where the community can experience theatre, share stories and begin to build a new from of civic centre.

Théâtre Source - a holistic response to site and context.

Invited by Doul’art to create an artwork for the Salon Urbain de Douala in 2010 (SUD 2010), Belgian sculptor Philip Aguirre y Otegui noticed a natural water source in Ndogpassi III, a densely populated makeshift neighbourhood that is home to 3000 refugee families in the city of Cameroon, Africa.Struck by the geography of the site, which took the form of a natural amphitheatre with steep slopes and an eroded centre bowl he worked to produced a maquette for the exhibition that illustrated a sculptural form that encapsulated a journey of thought that began with the daily basics of collecting water and washing laundry and ended in a sculptural guesture of an agroa in the city centre.Reportedly residents were initially disappointed with a mere maguette as the outcome for their project for the 2010 exhibition and were sceptical as to whether the intervention itself would materialise.

The following period between 2010 and 2013 was spent fund raising the necessary budget to complement the original grant of the Flemish Ministry of Culture, the SUD2010 partner. As well as producing and selling engravings of the Ndogpassi maguette, Philip and was able to convince the Belgian partners to raise the necessary funds. The build took a thirty-month construction period and was delivered in time for the following edition of the Salon Urbain de Douala, SUD2013.Before the intervention, the water source rose out of a muddied and difficult to access low point in the landscape. In the past it was only a place to collect water from, and now six tiered levels spanning more than twenty meters in length, served by three flights of stairs of about thirty steps, provided access to three terraced stages. On opening the work hosted theatre performances and screenings, while continuing to provide safe drinking water every day for three thousand homes in this area, who are not connected to the public network of water distribution. Théâtre Source has been described as bringing poetry, beauty and pride to everyday life in this shantytown in Cameroon. 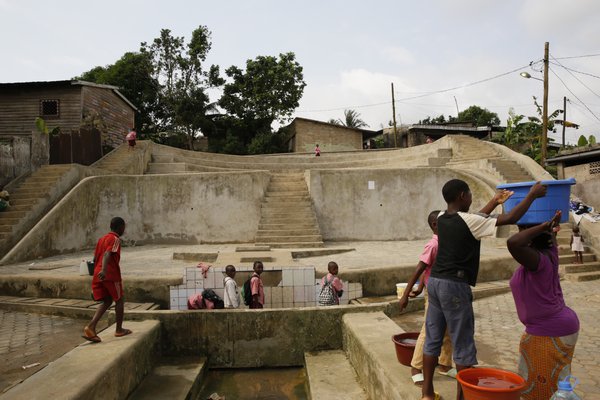